The spectacular new Prodrive Hunter will make its UK public debut at Salon Privé London which takes place at the iconic Royal Hospital Chelsea from 21-23 April. The world’s first all-terrain hypercar has been developed from the Bahrain Raid Xtreme competition car that was driven by nine-times World Rally Champion Sébastien Loeb on the world’s toughest motorsport event – the Dakar finishing second overall this year

Developed by the British Prodrive company – which boasts more than 40 years of off-road competition success – the production version of the Hunter is even more extreme than the car driven by Loeb. The 3.5-litre twin-turbo V6 engine has been refined and retuned at Prodrive’s Banbury HQ, and its power output has been boosted by 50 percent to more than 600bhp. In order to improve driveability, the competition car’s manual sequential gearbox has been replaced by a six-speed paddle shift that can change gear in milliseconds.

The double-wishbone suspension, with twin adjustable dampers on each corner, is carried over from Loeb’s racer but features 400mm of travel to give a smoother ride and allow the Hunter to cover rough terrain at unprecedented speed. Stopping power is courtesy of six-pot racing calipers and vented discs.

Were it not for the bespoke 35in off-road tyres that have been designed to optimise grip on loose surfaces, Prodrive states that its revolutionary new model would sprint from 0-100kph in less than four seconds and have a top speed of nearly 300kph.

Its high tensile steel spaceframe is clothed in bodywork made from lightweight carbon composite that includes recycled materials produced by Prodrive Composites. Famed designer Ian Callum styled the exterior of the original competition car and returned to the project to create a new interior for the Hunter that was more in keeping with everyday use rather than racing.

Prodrive Chairman David Richards said: ‘Royal Hospital Chelsea may be a long way from the terrain the car is designed for, but the Hunter is all about giving owners the opportunity to experience what it’s like to drive Sébastien Loeb’s rally-raid car – yet with all the comforts of a road car and the ability to drive it anywhere you like. It will allow enthusiasts to indulge their sense of motoring adventure like never before.’ 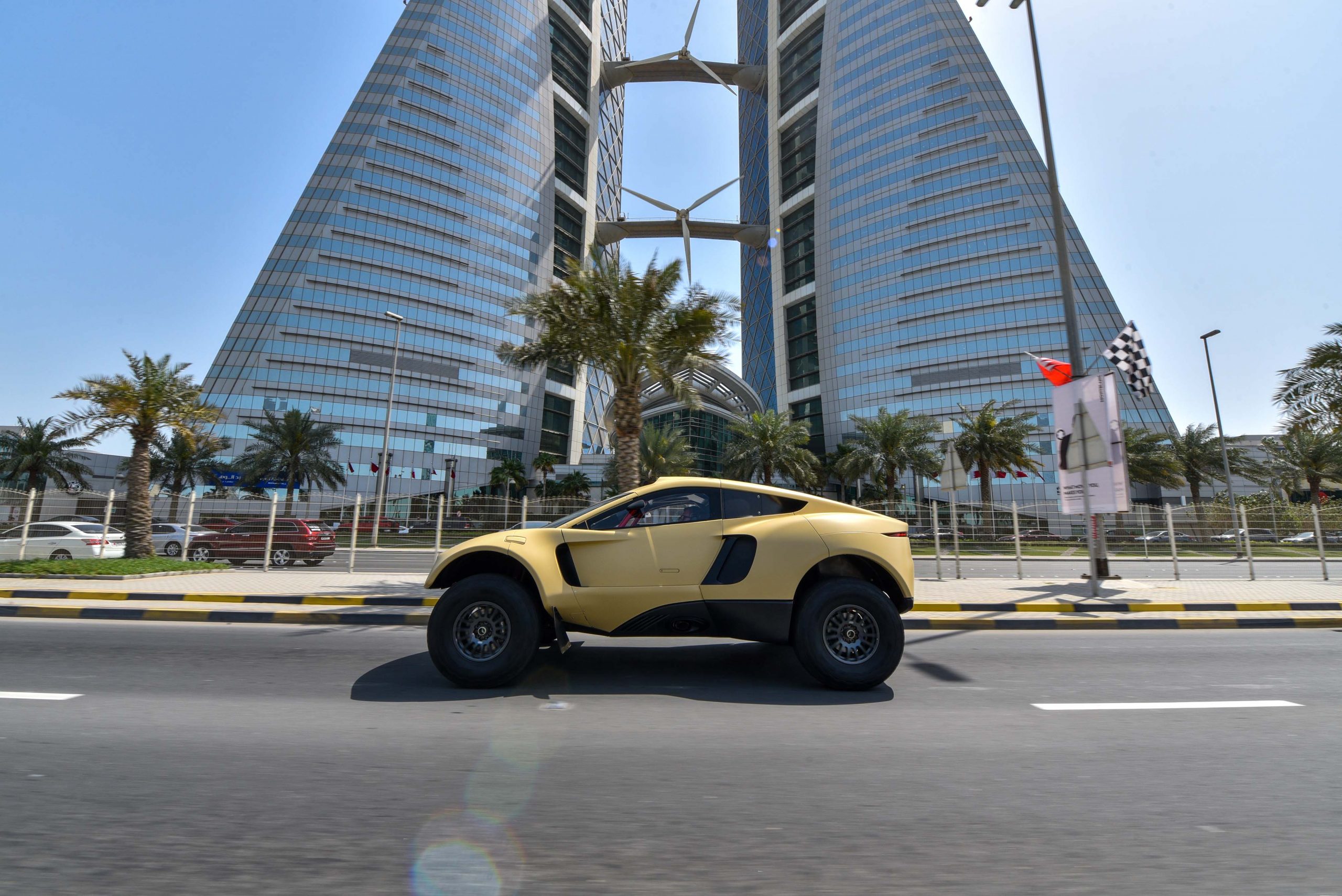 Director David Bagley said: ‘Salon Privé is renowned for hosting new-model debuts, and we’re delighted to be giving the Prodrive Hunter its UK public debut at Royal Hospital Chelsea. It’s a perfect match – as an event, we’re always looking to be innovative, and cars don’t come much more innovative than this. It also means that our guests will be able to indulge their passion for machinery that can take them off-road as well as on-road – and even on water and in the air! We’ll have all bases covered.’