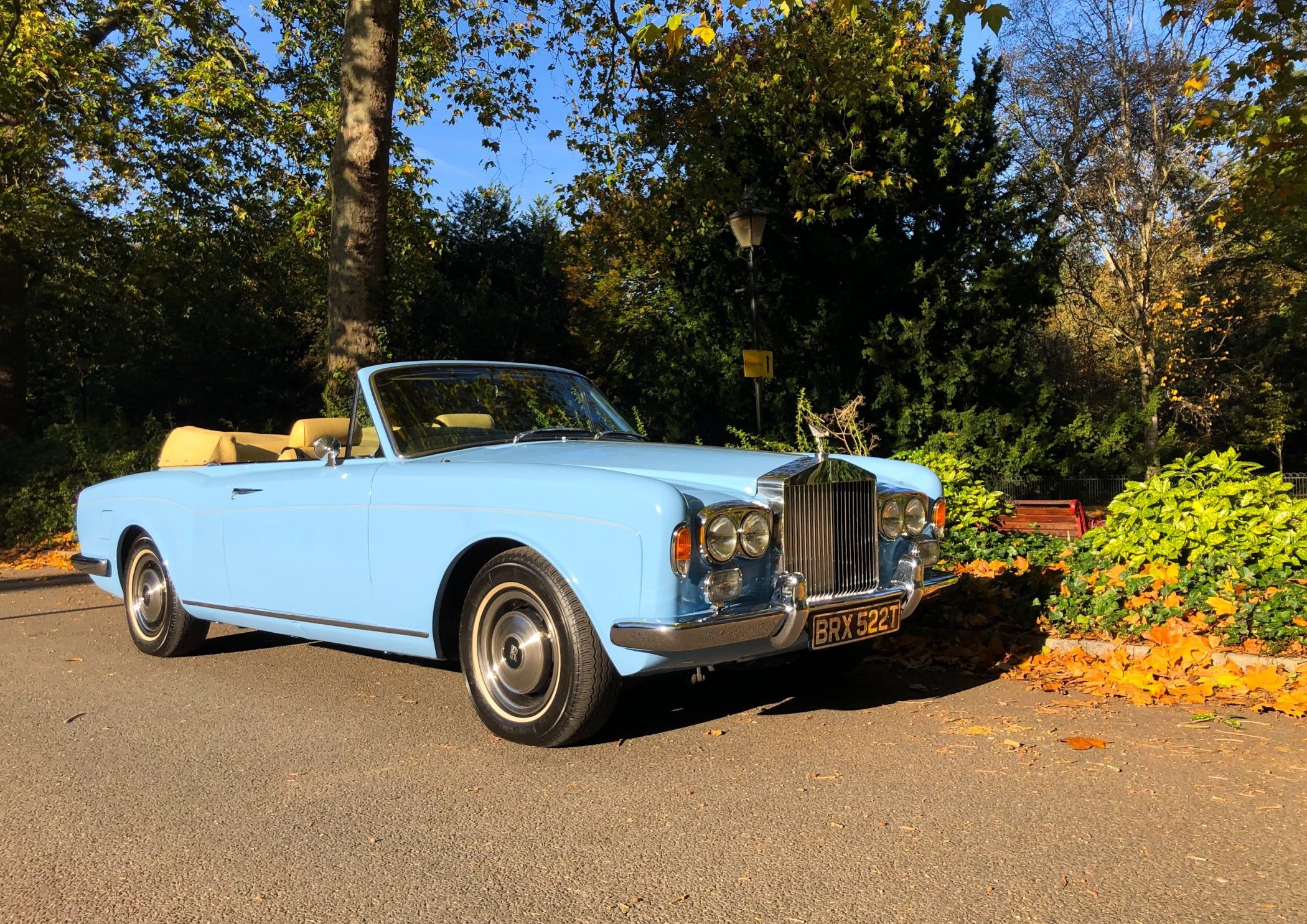 Simply gorgeous and very unusual too, the Corniche was simply the "top of the pops" in 1976 being the most ostentatious drop head available anywhere.

Driven by Hollywood moguls, film stars, the very rich and the very famous too they were completely hand made at the London, Mulliner Park Ward factory to special order only and therefore were exceedingly expensive.

The delightful version on offer here is from the highly sought after mid series version (often referred to as the 1a) which has most of the series II modifications whilst still retaining the earlier bodywork with chrome bumpers.

The most significant of these was the introduction of the bi-level climate control, a brilliant system that stayed in production until 2003, plus a fully redesigned fascia, seats, suspension and a twin exhaust system too.

Having spent most of its' life on the sunny island of Jersey and like many of the luxury vehicles registered there, mileage was nominal and in fact still stands now at just over 18.000

The original owner (incidentally, the same chap whose 900 mile Camargue Grame Hunt previously sold) purchased the Corniche from St Helier Garage, Official Rolls-Royce and Bentley dealers, who had come by the car as an "extra to quota" vehicle.

Correspondence validates how lucky the factory considered them to have been, being given this special extra unit to sell at a time when these cars were on back order for a matter of years.

The first owner, who incidentally kept her, like the Camargue, until his passing in 2011, bought her as a valentines gift for his wife - nice touch and must have been awarded an abundance of "brownie points".

The underside, engine bay and interior are all remarkable, immaculate and original, although the history folder is somewhat scant it can be sensed from the overall condition and driving experience that this motor car has hardy ever been used.

Indeed speaking with the second owners, again from the Channel Isles, they bought the Corniche directly from the lady who had been given the car as a Valentines gift, and the service manager from St Helier Garage (retired now) validated all of the above when Graeme Hunt called him when they previously owned the car.

The second owners undertook a light restoration upon purchase point with new blue paint (originally Nutmeg), modern stereo and reversing sensors and only sold it to fund another Bentley project they had on the go.

At this point, 2012 and still with only 6500 miles, she came here to the mainland and passed into the hands of her third owner, a French man living here in London who had a large collection of Rolls-Royce and Bentley motor cars.

He obviously loved her original and tight feeling for he used her regularly taking the mileage to 9.500 at which point they purchased her and immediately sold her to the fourth owner who kept her as his family outing car for the next 7 years.

He has a huge passion for motorcars with anything you could consider having been in his garage at some point - obviously maintenance has been carried out at all times, and whatever was needed was indeed carried out by our chum Michael Hibberd, including new front brake discs, accumulator spheres, new Avon whitewall tyres as well as the usual routine service items

Most recent works include a new hood in the correct beige Everflex and a repaint in BMC Iris Blue at the behest of his wife as it is a very pretty colour in the sun light - to be fair she is right.

Almost unrepeatable in this condition, she drives just like a three year old car coming out of Jack Barclay's showrooms.

Very rare in period, as mentioned above, and rarer still today this superb Corniche is a real treat and comes highly recommended.

Graeme has been involved with Classic Cars professionally for over 35 years now, and has been based in Central London for over 19 years. Graeme set up his own company (Graeme Hunt Ltd.) in October 2001 and quite naturally has a bias towards Bentley motor cars. Although now trades in all sorts of Classic Cars, even if they are not mainstream.