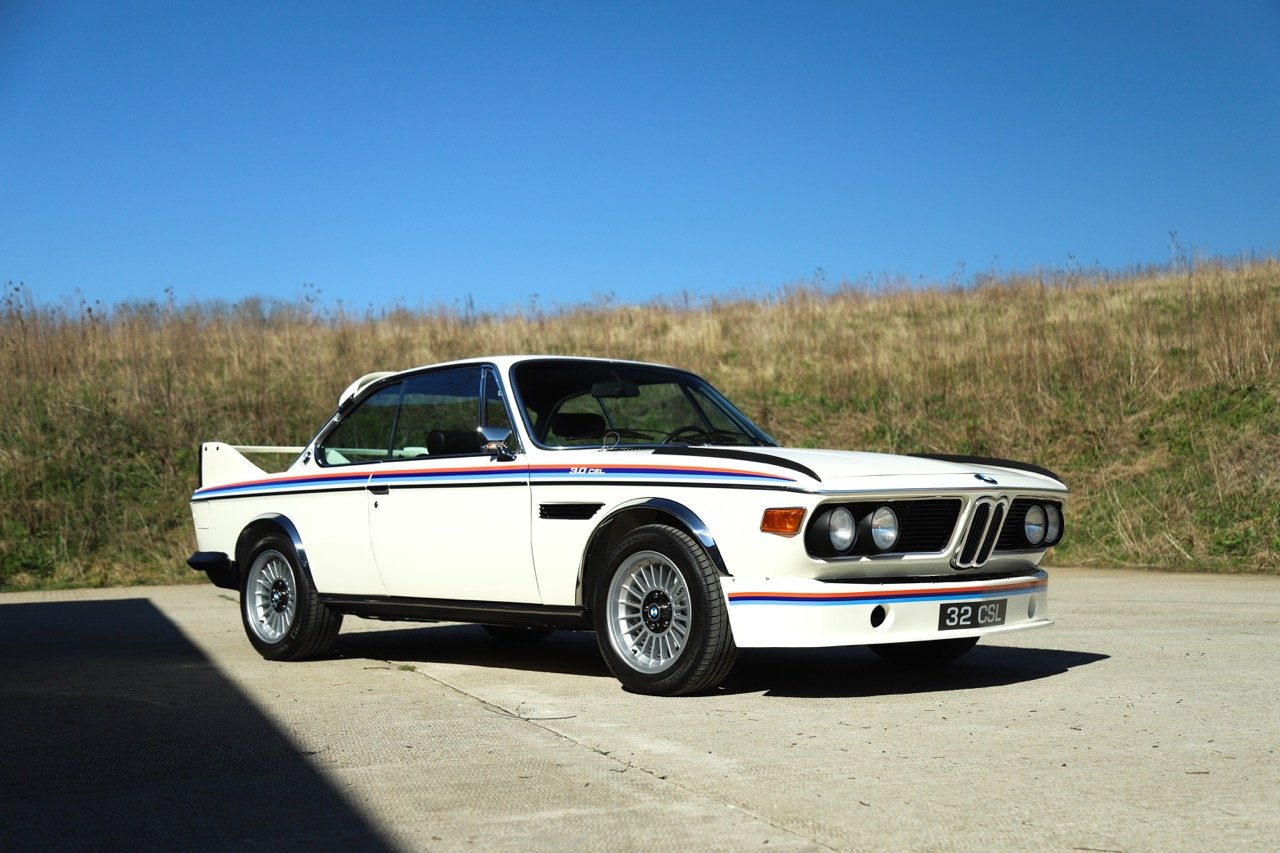 Detailed by its small bumpers, chrome arch extensions, iconic racing tri-colour stripes and of course the prominent aero kit, the silhouette is achingly pretty and purposeful from almost every angle. While the colour choice was wider for the final batch of CSLs it’s the iconic and classic Chamonix White and motorsport stripes that nods to the motorsport heritage and success that the CSL had on the racetrack and the birth of the BMW motorsport division along with the tri-colour stripe.

The paint work is first class having just rolled out from a 2 year nut and bolt restoration with marque specialists. The car was stripped to a bare metal shell and to our delight remained in remarkable condition thanks to its life in a favourable climate. All of the body panels were original, never changed and as manufactured by Karmann. After much delicate effort to minimise any changes to this the body was rebuilt and any repairs made done as per factory standard spot welds, folds, panel thickness and joining methods.

Further rust proofing is carried out at this time while panels are removed to ensure the integrity of the work is upheld for much longer than even the factory intended when new. Every component then attached is either rebuilt, refinished or replaced. As such every inch of the car is like new including the underneath which is as good to look at as the above with all components treated and rebuilt.

Mirroring the design of the E9s coachwork, the interior is a stunning example of high quality craftsmanship and lightweight design. During the extensive restoration process every piece of the interior was carefully restored or replaced to ensure the original factory finish or colour scheme has been upheld. The level of workmanship is extraordinary.

As a second batch Batmobile the Scheel driver’s seat carried an adjustable lumbar support while further options from factory could also be specified from new, in this case air-conditioning, electric windows and a radio added, a welcome addition to those wishing to use their collectible and classic cars. In this case the radio retains its period correct look but has been updated to modern standards internally allowing a Bluetooth connection and the factory speaker location hidden behind the centre of the dash.

Whilst still being badged a 3.0 CSL the final version of the CSL utilized an enlarged version of the fuel-injected M30 powerplant with a longer 84mm stroke for a new overall displacement of 3,153cc. Peak power and torque both increased slightly to 206 hp at 5,600 rpm and 215 lb/ft at 4,200 rpm.

This example retains its original engine and has been fully rebuilt to ensure common integrity throughout the restoration. Every component attached has been stripped down, re-plated or replaced resulting in a fresh as new finish rarely seen on the CSL. The original Getrag gearbox has also been rebuilt with every bush of linkage refurbished or renewed that becomes clearly obvious when out on the road with a tight and positive shift.

Currently sitting on the larger Alpina 16” wheels, the cars original 14” BMW wheels are included, date and part number stamped as per Batmobile CSL wheels, refurbished and present with dark centres as new from factory with sparkling chrome centre caps, new stickers and wheel bolts. All suspension components have been renewed or refurbished, complimenting an incredible restoration and contributing to a tight and responsive drive.

Delivered to A.A Zayani and Sons BMW in Bahrain and sold to the Royal Family from new. It is believed the family wanted a yellow car and it was repainted on arrival to Bahrain and stayed this colour up until its recent restoration. Such was the originality of the body that its original Chamonix white paintwork was still evident under the yellow when it arrived with us and it retained all of its original panels.

It’s life in Bahrain was limited and the mileage, whilst it can’t be verified is believed to be correct at just over 36k kms, the car passing through 4 owners hands until it was found by its 5th owner as a ‘barn find’ having sat for nearly 3 decades in Bahrain and imported to the UK.

Restoration took over 2 years to complete, with a full photographic log detailing the extent of the nut and bolt restoration of this historic BMW touring car. It is now UK registered and carries the personalised number plate 32 CSL.

This very special CSL is now ready for a new owner to propel it into its second life as a brand new CSL restored to factory standards as it rolled out of BMW nearly 50 years ago.