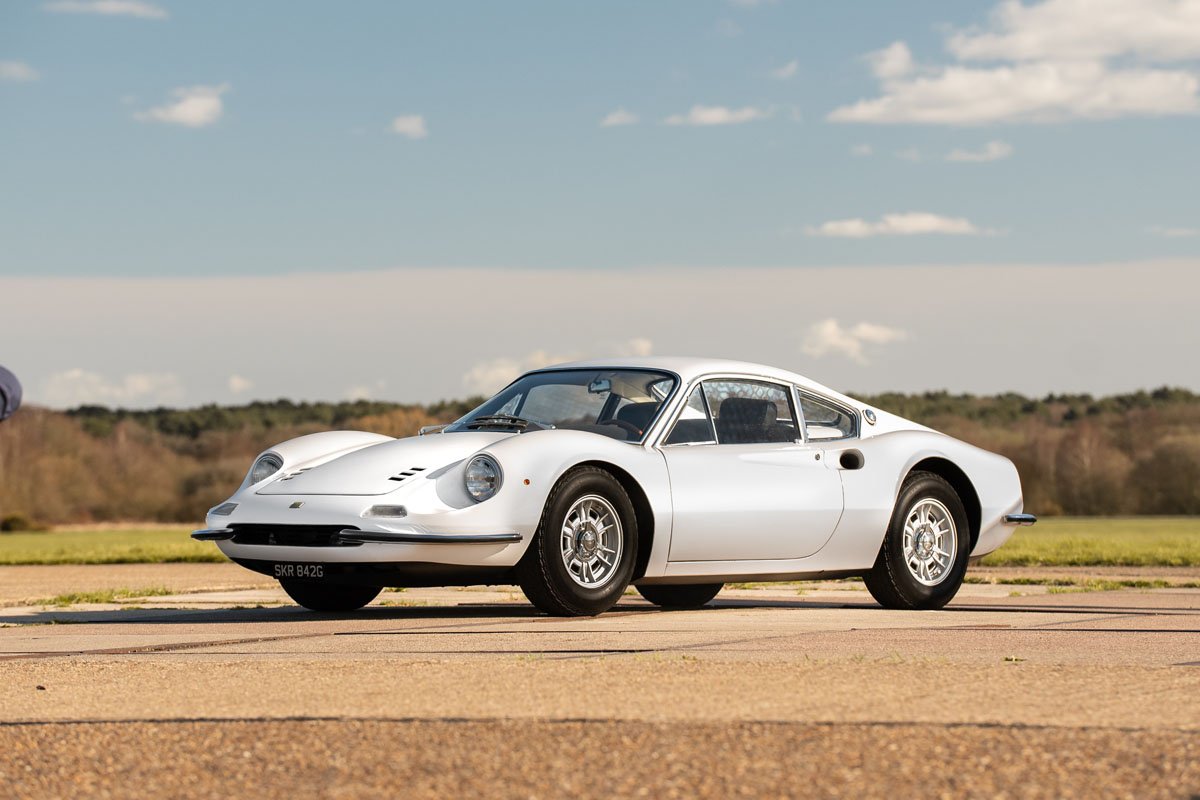 Few of Maranello’s classic models are as closely linked to the legend of Enzo Ferrari, and his personal story, as the 206 GT. After driving efforts to develop Modena’s first V-6-configured engine, Ferrari’s son, Alfredo, tragically died before ever hearing the double-overhead cam creation fire into life. A string of Dino-badged racers subsequently used the engine named in honour of the young engineer, but nowhere did the V-6 find a more fitting home than in Ferrari’s first mid-engine road-going sports car, the Dino 206 GT.

Unveiled at the Turin Salon in 1967, the 206 GT represented a step-change for the marque, which spent the decade specialising in front-engine V-12s built for crossing continents and dazzle the glitterati. In the Dino 206 GT, Ferrari manifested a true driver’s car, combining sublime handling and dynamics with a fizzing powerplant and timeless styling. And while the attention of collectors has historically been drawn to the later 246 GT, it’s the earlier iteration that holds the greatest cache among true cognoscenti, being both lighter and rarer than its successor.

Aldo Brovarone and Leonardo Fioravanti’s vision was brought to life in the workshops of renowned Carrozzeria Scaglietti, where the sumptuous, flowing lines penned by the Pininfarina draughtsmen were formed entirely in alloy—considerably lighter than the steel coachwork of the later 246 GT. Beneath that compact, taut bodywork, the 206 GT was a technological tour de force, sporting a two-litre, all-alloy version of the famed Dino V-6, mounted transversely amidships and mated to a five-speed manual transaxle. Fully independent suspension graced each corner, as did ventilated discs all-round, while the model became the first Ferrari to incorporate direct rack-and-pinion steering—features that would help cement the 206 GT as one of the best-handling cars of the period and herald the Prancing Horse’s expansion from luxurious gran turismos to world-leading roadgoing sports cars.

Just 153 of the special, alloy-bodied 206 GTs were built from 1968 to 1969, after which production shifted to the heavier 246 GT. Chassis 00320 is one of just 51 built in 1969, leaving Maranello’s workshops on 13 January finished in striking Bianco Polo Park over Nero “Skai” vinyl interior and riding on 6.5 x 14-inch Cromodora knock-off alloy wheels.

The machine was delivered to Romeo Pedini Auto S.r.l., an official Ferrari dealership in Perugia, Italy, before being sold to its first private owner—a Perugia local—in February 1969. Well enjoyed in those early weeks, the car visited Ferrari’s Viale Trento e Trieste facility in the centre of old Modena for servicing on 18 February 1969, having to that point covered 1,888 km. Its time in Italy was short, being exported to the United States in 1970, whereupon the car was resprayed in red. By October 1977 it was offered for sale at Speciality Motorcars in Arlington, Virginia, coming up for sale again a year later at Foreign Cars Unlimited in June 1978, having passed briefly through the hands of owners in North Carolina and Georgia. A year later, and with 24,219 miles on the clock, chassis number 00320 was offered for sale in Los Angeles, and again in 1980, when it was said to be finished in red with red velour interior.

From 1990 to 1993, the car belonged to a long-term Ferrari enthusiast, allegedly sitting alongside a Ferrari 500 Mondial Spider in a collection. From there it passed briefly through the hands of a well-known Ferrari parts supplier, before finding a long-term home in North Canton, Ohio, where it would remain for the next 20 years.

In 2009, chassis 00320 was the subject of an extensive restoration, after which it took pride of place at the 24th Cavallino Classic in January 2015 as part of a special class dedicated exclusively to Dinos, sporting the Ohio-badged license plates “206 GT”. Finished to a high standard in red over black interior with matching numbers chassis, engine and gearbox, 00320 was awarded Ferrari Classiche certification in June 2015 prior to being offered under the hammer at Pebble Beach, where it sold for $803,000—a then-world record price for the model at auction.

Shortly after, the car entered the ownership of the current London-based vendor, whose application for period-correct registration plates bearing suffix “G” appropriate for 1969 was approved on 16 January 2016. The vendor also commissioned a full repaint to return the car to Bianco Polo Park—the first time it had worn its factory colours in almost half a century, and the final burnish to cap an already world-class restoration.

Today, chassis 00320 presents as one of the finest of its type; a standout example among a select cohort that not only delivers as a highly investable piece of Ferrari history, but as one of the best-handling sports cars of the 1960s.

RM Sotheby's is the number one classic car auction house in the world. Cars for auction include rare antique, classic, and sports & racing cars.