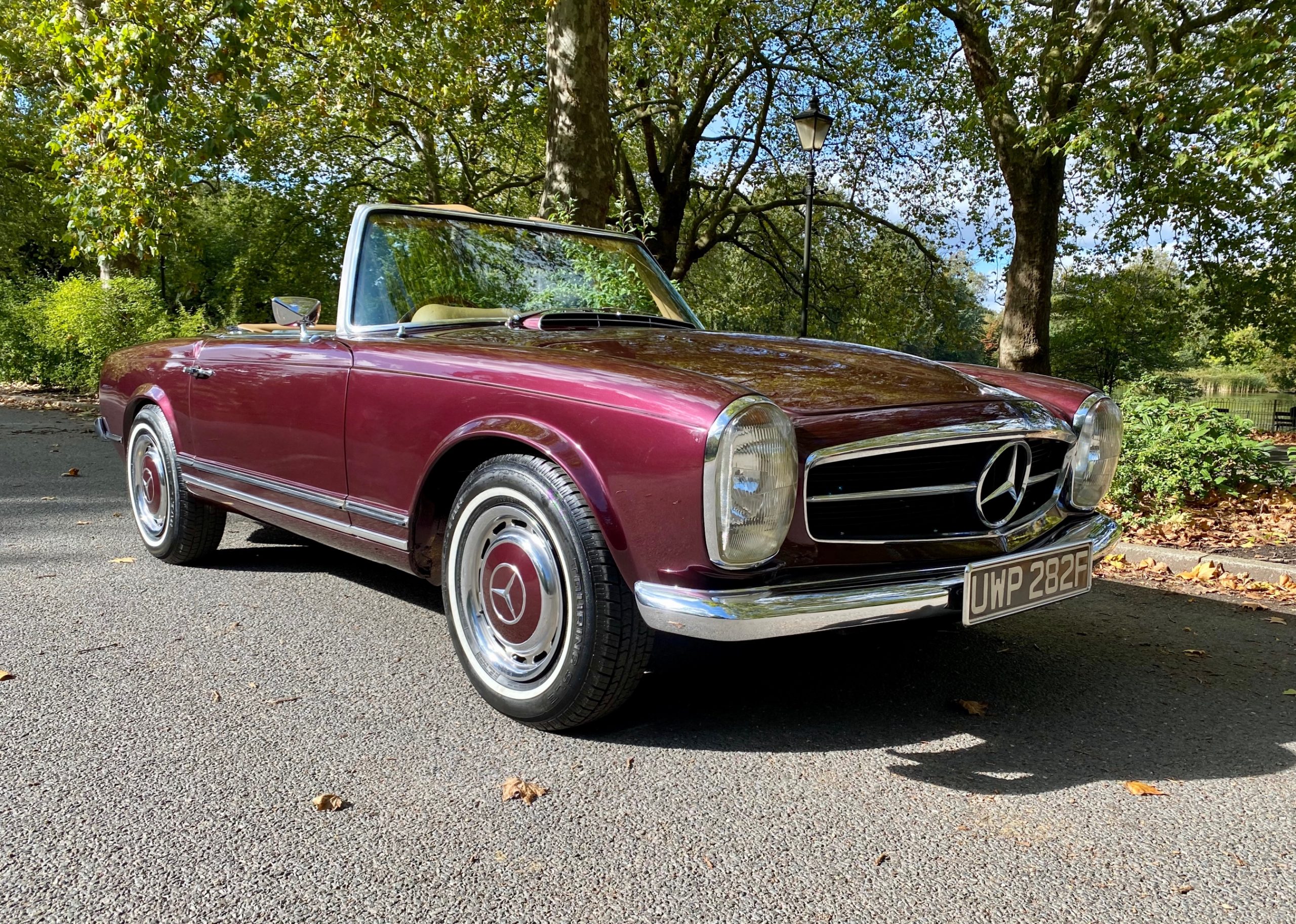 It’s certainly no secret that Graeme Hunt do love a Pagoda, having been brought up with them as youngsters & then used them for tours on the Continent, their appreciation from them only ever grows stronger

Unerringly reliable, pretty to look at and easy to drive with ample performance they transport their passengers safely in both comfort and style.

When new they were the first sports car to have been designed with an eye on safety and featured a rigid passenger cell and designated impact absorbing crumple zones in all four wings.

Today they are still spritely enough but the feeling of solidity and sternness one gets when behind the wheel, or indeed in the passenger seat, pays tribute to the pioneering ethos of the designers who wanted people to feel safe inside the car.

This is also part of what makes them such great cars for touring today, in addition to the rather large boot and rear luggage shelf.

This particular example has been given a full engine out & body off restoration, and the specification is very unusual and probably unique.

A few years ago it was thought it would be fun to find a rust free and mechanically healthy car as a base for creating the ideal Pagoda.

Paintwork was chosen in Wildberry, a 1990’s Rolls-Royce & Bentley colour, one of the prettiest colours of the period and perfect for a sports convertible such as the Pagoda - especially with the lovely tan leather and beige carpets.

A nice touch, we feel, is the soft green tinted glass (including the fully restored hard top as well) which, even if rather expensive, does add to the overall classic feel of this Pagoda.

There are those who would suggest you should stick to Mercedes own colours and as close to original as possible but Graeme Hunt's mindset is that if you are restoring a car it's not going to be original anyway so you might as well improve where possible.

The restoration has taken roughly three years to complete, from stripping her down to a bare shell (all parts of the restoration have been photographed, as you would expect), all mechanical components removed and all interior trim too.

The team did all of the works except the mechanical works, to whom entrusted was their great friends at Steve Redfern Motor Co in Wimbledon - you couldn’t ask for a better team to work with.

The fresh fully rebuilt engine, fresh gearbox, original back axle, suspension and brake systems do really set this car off from the norm and without Steve and his team, this Pagoda would not be the best driving version we have ever had before - high praise indeed from Graeme Hunt's end.

Similarly the colours really make this car and Graeme Hunt really think this is prettiest Pagoda they have ever seen too.

Graeme has been involved with Classic Cars professionally for over 35 years now, and has been based in Central London for over 19 years. Graeme set up his own company (Graeme Hunt Ltd.) in October 2001 and quite naturally has a bias towards Bentley motor cars. Although now trades in all sorts of Classic Cars, even if they are not mainstream.