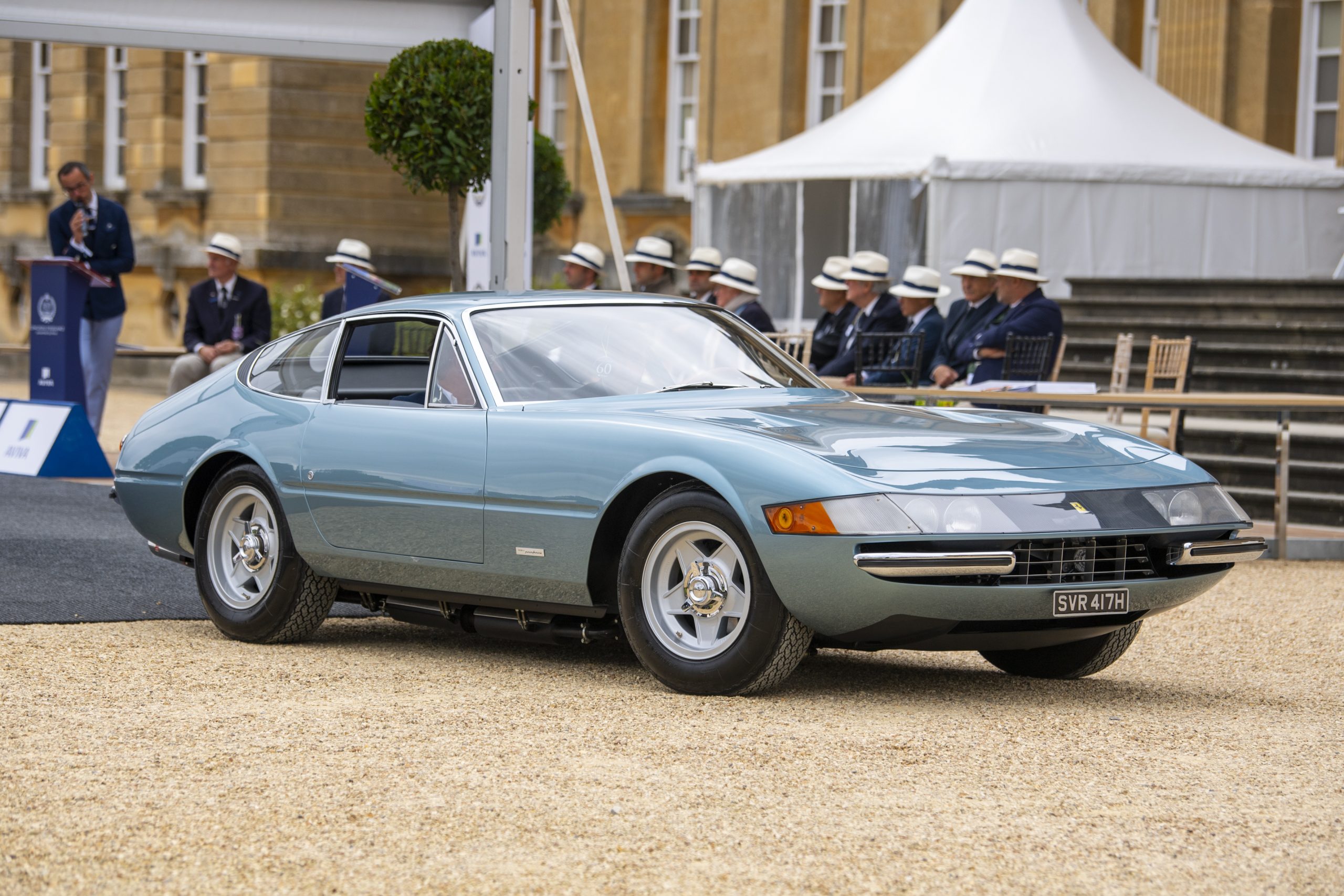 Ferrari 365 GTB/4 chassis #12545, ordered in October 1968 for Colonel Ronald J. Hoare CBE, the owner of the UK concessionaires, Maranello Sales. The car was purchased via Garage Francorchamps in Belgium as Ferrari had not yet built a right-hand drive car, and the Colonel was keen to get a demonstrator to his clients with the new Lamborghini Miura outselling the ageing 365 GTC.

The car wears its original specification of Azzuro Hyperion over Pelle Blu Scuro upholstery with Grigio carpets. Order no 385, was a very early example, number 15 to roll off the production line and the first ever 365 GTB/4 to come into the U.K as confirmed by Ferraris archives.

The car was brought into the UK as a temporary import via Belgium (for tax reasons no doubt) and once Maranello received their right-hand drive demonstrator they ‘returned’ the car back to Jacque Swaters to sell on. The car was then supplied to a Norwegian collector living in the UK and the car was officially imported. There is a letter explaining this situation, when reading between the lines it wasn’t smooth sailing!

Some years later, the car found itself in France where it resided for most of its life. Like many other Ferraris, the car underwent a colour change to Giallo. It was then purchased by Nicolas Todt in 2007, who of course has a very good connection with Ferrari, Nicolas still managing a Ferrari F1 driver.

Mr Todt then commissioned Ferrari Classiche to restore the car with Zanasi, to carry out a no-expense-spared restoration, returning the car to its original specification of Azzuro Hyperion with Blue Scuro trim and Grigio carpets. The original Nardi steering wheel was retained which is still fitted today, along with the squared off wheel spinners as per the Plexiglass cars.

Chassis #12545 possesses an exceptional history file with all its original correspondence between Ferrari S.P.A., Maranello Sales and Garage Francorchamps. The car has been awarded Ferrari Classiche Certification with red book present.

Over the last 15 years Furlonger has become one of the United Kingdom’s foremost Ferrari and Lamborghini specialists. They have continually built a reputation for specialising in these distinguished marques and have broadened their expertise into McLaren, Bugatti and other prominent performance brands. Their highly experienced sales team have handled the purchase and sale of numerous supercars, desirable classics, blue-chip collectibles and competition race cars.

Supporting their sales division is our vastly capable workshop team who collectively share a combined experience of well over 100 years. Their professional technicians coupled with their extensive workshop facilities gives them the ability to provide a complete service for almost any classic or supercar. They can carry out anything from general maintenance and routine servicing right up to a comprehensive overhaul or total restoration. Their service department also offers menu price servicing for Ferrari, Lamborghini, McLaren, Maserati and they can also cater for other performance marques including Bentley, Aston Martin, Koenigsegg, Pagani and specifically Bugatti EB110 and Jaguar XJ220.

Using the principles of honesty, transparency and going above and beyond has enabled Furlonger to become the marque specialist it is today. Their passion, enthusiasm, knowledge and dedication have proven themselves with a long standing client base that spans across the globe. They value each and every customer, every car and transaction, big or small with the same level of attention to detail.