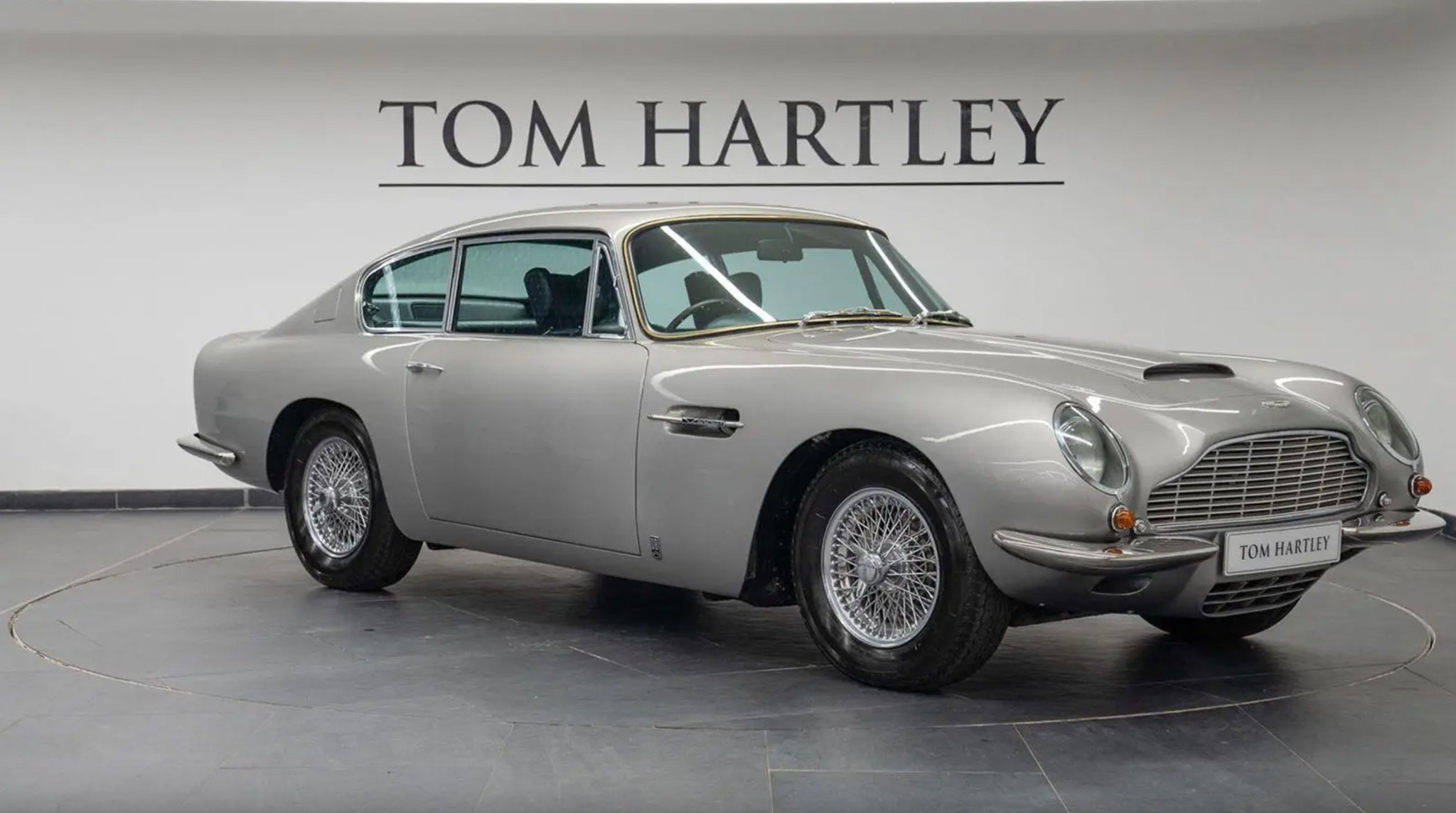 Introduced at the 1965 London Motor Show, the DB6 was already a dated design notable as the first model engineered following a factory relocation from Feltham to Newport Pagnell. The DB6 has a resemblance to its predecessor, the DB5; with the most noticeable differences being its wheelbase, side profile, split front and rear bumpers and rear panels incorporating the Kammback tail rear end. The tail, combined with the relocated rear-axle and the 3.75-inch (95 mm) lengthened wheelbase, provide more stability at high speed. This particular example was originally supplied in 1967 in Fiesta Red to a Mrs Cloete in Zambia in 1967, where it spent only a few years before being sold to a Mr Richards in South Africa. During his ownership he had the car repainted in Silver Birch, which was fashionable at the time due to the Aston Martin's appearance in the James Bond movies in the early 70's. He then kept the car for the next 25 years with little use, until the car was then sold on to a Mr Moti who had established a specialist classic car company. From this company the car was sold on to a businessman called Mr Scheibe in Cape Town in 2009, who had an extensive collection of cars including Ferrari, Porsche and was chairman of the local Aston Martin owners club. The DB6 then received an extensive restoration treatment including repaint (once again in Silver Birch), and the engine was sent to world famous Heritage specialist and engine builder RS Williams, where it was rebuilt in 2014 as a 4.7 litre unit. In 2019 Mr Scheibe passed on the running of the Aston Martin Owners Club to a Mr Webb along with the ownership of the DB6, who was also an Aston Martin enthusiast and collector. Only in 2018 the engine was reunited with the car after all mechanical work was complete, along with the addition of a new air conditioning system. Mr Webb decided that he needed a car to use whilst in England and brought the car across in 2019. It then spent time at renowned Aston Martin Heritage specialists, Oselli, where it had brake servo's replaced along with electric window mechanisms before visiting well known Aston Martin body specialists, Long Pine, where it had new stainless bumpers fitted to the front and rear. The car retains its original engine and gearbox along with the original black Connolly leather interior in excellent condition. The car drives exceptionally with taut suspension, brakes and great performance with over 400 hp at the pedal. This DB6 has to be the best available in the UK, perhaps even the world at the moment and must be seen to be appreciated!

"We pride ourselves on the complete discretion given to each and every one of our esteemed clients, treating their confidentiality as a matter of the utmost importance as such we have chosen not to display testimonials on our website. We are content with the countless positive independent reviews and articles in leading publications and global television that have enhanced the unparalleled reputation of Tom Hartley for more than 45 years."