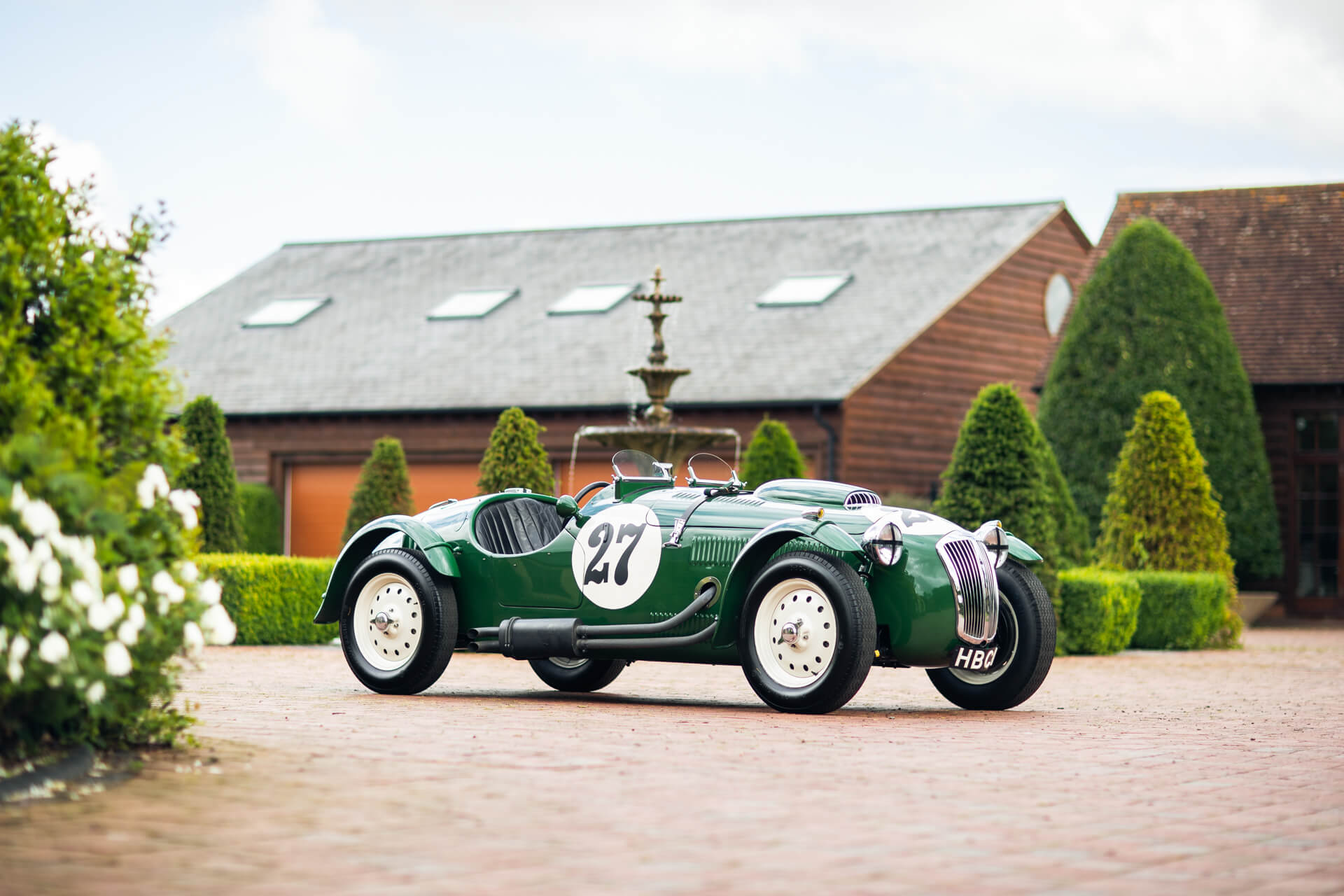 Just as intrepid climbers have a bucket list of mountain peaks they wish to summit and avid foodies seek to dine at the world’s greatest restaurants, serious historic racing drivers yearn to compete at history-steeped theatres of speed and follow in the tyre tracks of motorsport’s most famous faces of yore.

As a result, provenance and eligibility are key factors in determining a historic car’s desirability and value nowadays – what a car did in period and, accordingly, which events it’s eligible for today are often the first questions their clients ask them.

On that note, allow Girardo & Co. to introduce the Frazer Nash Le Mans Replica, not only one of England’s most significant 1950s sports-racing cars, but also a golden ticket to the world’s greatest events. The Goodwood Revival, the Grand Prix de Monaco Historique, Le Mans Classic, the Mille Miglia and even the Pebble Beach Concours d’Elegance – the pool of cars with which you can be a part of all the aforementioned events is tiny. The Le Mans Replica is in that pool.

Only some 34 Le Mans Replicas were built by A.F.N. Limited at its Isleworth factory between 1948 and 1953, and they were successful. Really successful. Driven by the likes of Stirling Moss, Roy Salvadori and Tony Brooks, they amassed a wealth of victories, including at Sebring and the Targa Florio. In fact, the Le Mans Replica remains the only British car to have ever won the Sicilian road race.

The Frazer Nash Le Mans Replica we’re honoured to be offering was assigned the internal factory number FN19 and stamped with the chassis number 421/100/119, though it’s more commonly known by its registration number ‘HBC 1’. The car was sold new by the Works for the grand sum of £1,986 to Frederick Roberts ‘Bob’ Gerard, a name which, along with Dickie Stoop, Roy Salvadori and Sir Stirling Moss, is intrinsically linked with the Frazer Nash marque.

Gerard was the archetypal British gentleman driver – a hardcore enthusiast with the wherewithal to take his hobby to the highest rungs on the motorsport ladder. He’d made his name racing Rileys before the War and became the most eminent British ERA driver, with victories in the British Empire Trophy from 1947–49.

‘HBC 1’ passed through the hands of several further enthusiastic owners in the United Kingdom, the majority of whom raced it at club level, until 1965, when it was exported to the United States. In 1971, by which point it had been painted white, ‘HBC 1’ was sold to the Arizona-based collector Ned Curtis. Curtis clearly cherished this historically significant Nash, keeping it for 27 years and competing with it at Laguna Seca and even entering the Mille Miglia Retrospective in 1986. When Curtis sadly died in 1998, ‘HBC 1’ was passed on to his family, who only sold the car in 2002.

Frank Sytner repatriated ‘HBC 1’ to its homeland that year. Following an appearance at the 2004 Goodwood Revival, the renowned Frazer Nash specialists at Blakeney Motorsport in the United Kingdom were entrusted with thoroughly inspecting and comprehensively rebuilding this Le Mans Replica in 2007. In addition to the suspension, the gearbox, differential and engine ancillaries such as the carburettors and distributor were all rebuilt to the highest and safest modern standards. A new aluminium fuel tank was also fabricated and fitted, along with four new wheels.

The work was completed in time for Sir Stirling Moss to take the wheel during the 2008 Grand Prix de Monaco Historique. In 2012, Bonhams offered ‘HBC 1’ at its Goodwood Revival auction and this is where the current custodian acquired the car. Since then, he has truly made the most of this Nash’s eligibility, enjoying the car at a number of the world’s most famous events. These have included both the Revival and the Members’ Meeting at Goodwood, the Grand Prix de Monaco Historique and the Le Mans Classic.

Today, ‘HBC 1’ is accompanied by an extraordinary wealth of documentation, the like of which we’ve never seen before. There are 14 leather-bound binders filled with everything from the original United Kingdom V5 registration document and period magazines featuring reports of races in which the car competed to entry forms and driver’s passes to the modern historic events ‘HBC 1’ contested and its current FIA Historic Technical Passport.

With a superb period competition history in the ownership of one of the marque’s stalwart supporters, an unbroken chain of ownership and eligibility to the world’s greatest historic motorsport events in spades, ‘HBC 1’, the ex-Bob Gerard 1950 Frazer Nash Le Mans Replica, is arguably among the most desirable post-War British sports-racing cars in existence.

At Girardo & Co. they understand that classic cars represent so much more than the sum of their parts. Life is formed of experiences. And as experiences go, there’s little that can beat the fun, escapism and romance of driving a piece of motoring history, especially in these unprecedented times.

They champion these beliefs in everything they do. Providing an unrivalled holistic experience to their global network of clients is our primary goal, from discreetly sourcing or powerfully marketing the greatest classic cars in the world to imparting expert informed and impartial advice.

Boasting an dynamic, knowledgeable, passionate and wildly enthusiastic team with decades of experience at the very top of the collectors’ market, we draw on their first-hand knowledge to understand your needs and support you through every step of the process. They always put your interests first. And you can rest assured knowing that they leave no stone unturned on their quest to research each individual car they encounter, verify its provenance and originality, and present it in a manner truly worthy of its significance.

Between their fabulous new HQ in Oxfordshire, their facility in Turin and their pop-up showrooms at the most important events both here in Europe and across the pond in America, their clients are always welcome to visit them, whether it’s to discuss a future consignment or simply bask in the beauty of the fantastic classic cars with which they surround themselves. The coffee machine is always on…